Claridges Surajkund: My stomach & other animals

February 04, 2013
If it is winters, brunches have to rain. But wait, you might be just mistaken. Now, like round-the-clock traffic in Delhi, brunches too have become all-season. Meenakshi Rao attends one to tell you how an away location, a sunny afternoon and a garden spread are must.


The doctor had been recommending a jog for a very long time so I decided it was time I gave my stomach one. The sunny Sunday afternoon of a dying winter, the long forested area drive on a sinewy and lonely road soon after the BRT mayhem of sights and sounds, and the anticipation of spending a lazy afternoon doing nothing but sipping the bubbly and savouring the delights spurred me on to a track not oft taken by me even if I am feeling indulgent.

Popular posts from this blog

An 'upright' killer vs brutal murderer

September 10, 2011
Somewhat erroneously, the Neeraj Grover case is being compared to the 1959 Prem Ahuja/Nanavati murder case. But the two cases could not have been more diametrically opposite. Cut out the superficial similarities of both the killers being Naval officers and that in both cases someone connected to the wife/fiancee was done to death in a fit of rage, there is nothing more to suggest that anything else was similar.  Meenakshi Rao  recalls the Nanavati case which was a watershed in the genre of crime of passion cases If Emile Jerome Mathew’s act of murder is all about cruelty, brutality and inhumanness, Kawas Manekshaw Nanavati's was about romance, rage and propriety. Or, at least, it was perceived as such. Hence Nanavati, despite murdering ritzy playboy and serial womaniser Prem Ahuja, garnered so much public support that there was hardly anyone, except of course the victim's sister Mamie Ahuja, who sought life or death for the much celebrated naval officer, or for that matter his
Read more 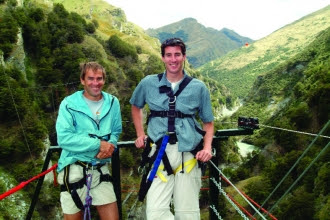 The young duo of Chris Russell and Hamish Emerson has given Queenstown its newest and scariest adventure activity. Hamish talks to   MEENAKSHI RAO   about go at fear, extreme height drops and how their product is unique in the world. Excerpts from the interview: What on earth made you think of such a scary jump and swing? Chris and I (Hamish) spent years reconnoitring rock faces through every inch of the Wakatipu Basin, climbing, abseiling and swinging.  Swinging around on the end of a rope started from a passion for freefalling and jumping off things — we’d set up swings off local bridges to create a buzz ourselves and with our mates. The idea for getting a permanent location to jump off came from mates who enjoyed the rush and thought others would too. Is your product entirely unique or do you have similar things happening elsewhere in NZ or globally? We were pioneers in commercial swinging with freefall. Others have copied us since, but none are set up to provide the
Read more

December 23, 2012
One of the most brutal tales of woman empowerment has been scripted in Nagpur's Kasturbanagar. Tired of suffering rape and terror unleashed by a local goonda, 150 women of the locality caught hold of him in the courtroom, dismembered him, sliced his genitals and stoned him to death. Shielded by the police, the slumlord had left a trail of rape, intimidation and extortion in the 10 years of his criminal career. The rough and ready justice administered to Akku by his victims has struck a chill in the hearts of his gangmen who are now either underground or thinking of alternate careers. Meenakshi Rao meets Nagpur's overnight women heroes who are on a victory trail and daring the goons to come near them Nagpur is otherwise a quiet city, quiet and disciplined. On the crime graph, it takes only a bronze, with Mumbai and Thane doing the more respected (dis)honours for Maharashtra. But, for the past 10 days, it has been celebrating something it never would have dreamt of serenading
Read more